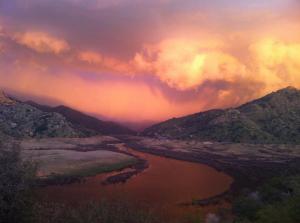 by more and more science and technology.

Technical solutions, in the absence of world population controls, only tend,

over time, to escalate the problem.

As Einstein put it, “We need a substantially new manner of thinking if mankind is to survive.”‘

Human beings have a kind of optical illusion, Einstein once said.

We think ourselves separate rather that part of the whole.

“Our task must be to free ourselves from this prison

by widening our circle to embrace all living creatures…

Nobody achieves this completely, but the striving itsef is part of the liberation.”

The Aquarian Conspiracy, by Marilyn Ferguson.

Walking in nature, planting the garden, looking toward the hills,

the reality of our changing planet eludes me.

The darkest shadow, mirrors my own selfish actions and ambiguous thought.

Should I manufacture sorrow for the future, or just perceive the beauty of today?

The reality of it is that I am almost paralyzed with dread, my mind searches for a solution,

plans action, all the while overwhelmed with the extent of the problem.

The way I think affects my mood, a changing kaleidoscope of emotions.

I feel that I am one of the fortunate ones; feeling despair seems the truthful emotion.

The following article based on an interview with Dr. Roger Sperry, Board of Trustees Professor of Psychobiology, Emeritus, at California Institute of Technology and a veteran pioneer in brain research. Dr. Sperry’s findings on the two hemispheres of the brain and their respective functions earned him the Nobel Prize in Medicine/Physiology in 1981.

“The mind-brain issues are intrinsically more compelling. They carry strong humanistic as well as scientific implications. I could foresee changes in our world view, guiding beliefs, and social values. In the context of today’s worsening world conditions and our imperiled future, this work seemed far more important than whether you can find a brain theory enabling people to learn faster, draw better, make better medical diagnoses, and so on.”

“On these new terms, science no longer upholds a value-empty existence, in which everything, including the human mind, is driven entirely by strictly physical forces of the most elemental kind. We get a vastly revised answer to the old question “What does science leave to believe in?” that gives us a different image of science and the kind of truth science stands for. This new outlook leads to realistic, this world values that provide a strong moral basis for environmentalism and population controls and for policies that would protect the long-term evolving quality of the biosphere.”

To read the entire essay:

7 thoughts on “Saving the planet and changing the way we think.”